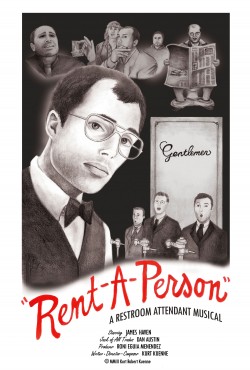 “Rent-A-Person” is a romantic musical comedy about a men’s room attendant who founds an organization which revolutionizes rush hour traffic.

“…a bona-fide masterpiece…Ernst Lubitsch meets Second City…Kuenne’s camera work and compositions are outstanding.  I can’t often say of a film that it made me laugh until I wept.  Rent-A-Person did.” – moviesintofilm.com

“Filmmaker Kurt Kuenne has a lot of imagination and it is easy to predict this multi-talent (director, writer, editor, cinematographer and composer) will be a major force in films some day.” – Film Threat

“Writer/Director Kurt Kuenne’s tale of a lyrical loo is 12 minutes of black and white brilliance.” – writebetweenthelines.com