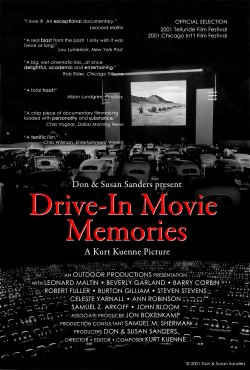 Buy the books on which the film was based:
“The American Drive-In Movie Theatre” and
“Drive-In Movie Memories” by Don & Susan Sanders

“Kurt Kuenne, who directed the documentary for drive-in experts Don and Susan Sanders, doesn’t just tell the history of the drive-ins, he shows it.  Drive-In Movie Memories doesn’t just inform, it recreates.  The strength of the documentary is not in its educational value, but in its ability to make the viewer feel what it must have been like to steer into a drive-in theatre on a warm summer night, to roll down the window and feel the breeze drift through the car, to fend off the mosquitoes with one hand while digging into the popcorn with the other.”
– Chicago International Film Festival

“I love it!  An exceptional documentary.” – Leonard Maltin

“Drive-In Movie Memories” is a film celebration of moviegoing under the stars, and a chronicle of the history of outdoor cinema.  What began as an auto parts store owner’s business venture to make some easy money accidentally became a magical place where romance, fun and a sense of community flourished.  The film features original interviews with Leonard Maltin, Barry Corbin, Burton Gilliam, Beverly Garland, Samuel Z. Arkoff and Joe Bob Briggs.