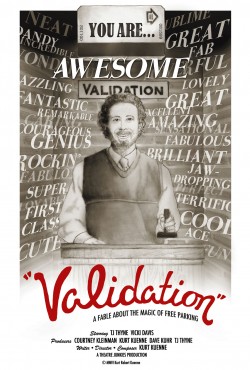 “Validation” is a fable about the magic of free parking.

“How to describe Kurt Kuenne’s short film, Validation?  It’s a tiny little masterpiece of score and scope and vision, and it’s remarkably simple, turning on the premise: what if one guy ‘validated’ your parking and also ‘validated’ your existence?  (It’s such an Amelie-like crowd pleaser of a fable that it’s hard to reconcile that it’s done by the same director who did last year’s devastating, excellent, must-see documentary, Dear Zachary: A Letter to a Son About His Father.)  Once the initial sweep of drums cues up and the likable, gentle Hugh Newman (Bones’ TJ Thyne) starts ‘validating’ a ‘customer’, you’re hooked.  Stop what you’re doing and devote the next 16 minutes of your life to Kurt Kuenne’s magical short…we guarantee that you’ll smile.” – TribecaFilm.com

“**** (Four out of four stars) When Validation captured the Best Short Grand Prize at the 2007 Heartland Film Festival, this paraplegic nearly stood and applauded…a delightful, funny, sweet and inspiring film that will make you laugh and cry in the film’s short span of 16 minutes.  The award-winning film is perfectly cast, most notably the awesome performance of TJ Thyne as Hugh Newman.  Easily one of 2007’s most delightful shorts.” – The Independent Critic

“With a pitch-perfect payoff, Validation offered 16 of the most joyful minutes I’ve spent watching a movie in a long while.” – Indianapolis Business Journal

“Validation drew a huge round of applause from the audience and it was easy to see why;  what a crowd pleaser!  I found myself grinning through the whole story…” – fest21.com

“This film is original, well made, great music, very funny, but has something to say that is so rich that if we all went and followed suit, we could change the world.” – Toni Powell, Heart of Gold Film Festival