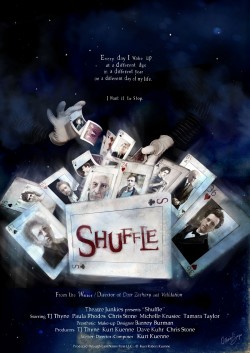 The DVD contains both the Black & White Director’s Cut and the Color version of the film, plus 50-min of bonus features, including a 30-min behind-the-scenes documentary edited by Kurt Kuenne.

Winner of 11 awards including the 2013 Frank Capra Award

“SHUFFLE is a movie to be EXPERIENCED, not told about, and Kuenne’s efforts in developing the characters throughout the film is some of the best work I’ve experienced, with careful attention to detail, and assisted by some excellent performances.” – Geeks of Doom

“Kurt Kuenne perfectly captures on film so much genuine emotion it’s almost overwhelming to watch at times.  Every emotional sensation you could possibly encounter runs through your body as you take it in.” – Examiner.com

“SHUFFLE is the kind of movie that demands two viewings, the first to be awed by the show and the second to see how the sleight of hand came together…a near perfect orchestration.” – Off to the Films

Shuffle is the tale of a man who begins experiencing his life out of order;  every day he wakes up at a different age, on a different day of his life, never knowing where or when he’s going to be once he falls asleep.  He’s terrified and wants it to stop – until he notices a pattern in his experience, and works to uncover why this is happening to him – and what or who is behind it.