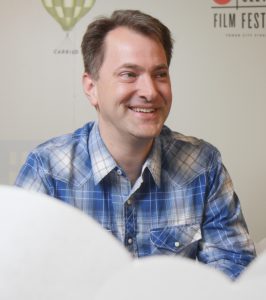 Kurt Kuenne is an award-winning filmmaker and composer of both fiction and documentary films. He is a graduate of the USC School of Cinematic Arts, where he won the Harold Lloyd Scholarship in Film Editing, and where he also studied film scoring at the USC School of Music under the tutelage of classic film composers Buddy Baker and David Raksin. His first feature, the teen drama “Scrapbook” (1999), landed him on Filmmaker magazine’s 25 New Faces of Indie Film feature, and he followed it with “Drive-In Movie Memories” (2001), a documentary about outdoor movies which opened the 2001 Telluride Film Festival and played nationally on PBS.

In 2008, he completed his 6 year passion project, the documentary “Dear Zachary: A Letter To A Son About His Father“, which premiered at the Slamdance Film Festival. The film was released by Oscilloscope Laboratories and MSNBC Films, was named one of the Top 5 Documentaries of 2008 by the National Board of Review, won numerous awards and placed on more than 40 critics’ lists of the Ten Best Films of 2008. In 2012, PBS POV named it one of the “100 Greatest Documentaries of All Time”. “Dear Zachary” inspired the creation of Bill C-464 in Canadian Parliament, which reformed Canada’s criminal code when it became law on December 15, 2010. (An epilogue chronicling this process – “The Legacy of Dear Zachary: A Journey to Change Law” – was released on the web in 2013.)

In 2011, he collaborated for the second time with actor TJ Thyne (“Validation”, “Bones”) on the fiction feature “Shuffle“, a mystery/fantasy about a man who begins experiencing his life out of order, which was released by Screen Media Films and won numerous awards at film festivals worldwide, including the 2013 Frank Capra Award.

In 2014, he co-wrote, edited and sound designed the celebrated documentary “Batkid Begins” for his Emmy-winning director pal Dana Nachman. The film premiered once again at the Slamdance Film Festival, won 5 audience awards and was acquired by Warner Bros. Pictures/New Line Cinema, who released it theatrically on June 26, 2015. Julia Roberts acquired the film’s remake rights.

His work as a composer includes re-scoring the restoration of the silent classic “Cyrano de Bergerac” (1925) and writing the book, music and lyrics for an award-winning stage musical adaptation of the New York Times-bestselling novel “The Looking Glass Wars”.

Kurt is managed by Good Fear Film and Management.